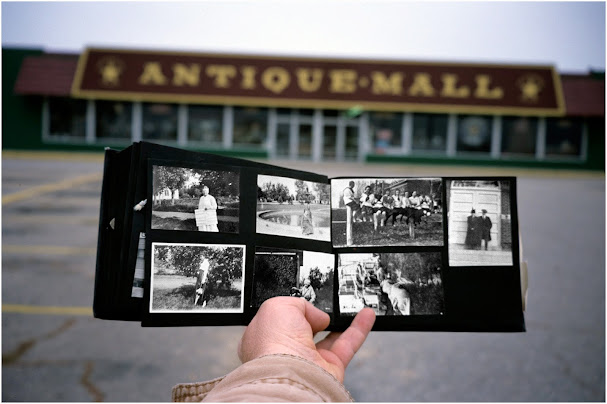 Nina's family photo album and the Antiques Mall where I discovered it, Wheatridge, Colorado  (the antiques mall no longer exists). In 1993, I happened upon an album of family photographs, sadly abandoned in a Denver antiques mall. I was seduced by the images and purchased the album. I felt I was rescuing it from oblivion. The photographer was obviously an amateur, not experienced in the basics such as composition and lighting. However, their reflection was in the faces of everyone they photographed. When I discovered the album, I had recently completed a photography undergraduate degree at Edinburgh Napier University. The degree course advanced my technical skills and my ability to construct stories using images. Most significantly however, I became cognizant about how photography could function as a lens through which to contemplate my own existence.  With that realization in mind, the discovery of a seemingly insignificant little album of family photographs, made by a person I di
Post a Comment
Read more